A team of technically competent employees is to be formed to jointly design and implement a complaint management system.

In practice, the first step is to determine what the team should achieve, which goals should be achieved and which tasks result from this. This can be done as a list of keywords. In the following example, a general definition of complaint management by the IPM text analysis was evaluated as a description of the team.

Profile of the team

The results of the text analysis are stored in the database and are available for the following comparison operations, but also for the derivation of recommendations for team management.

The values are derived from the IPM scale, where 100 is the average of all team descriptions. Values from 90 to 110 are normal values. Smaller values mean that this value is less important. The larger the value, the more important it is to deal with this value more intensively. These are here:

The team personality should prioritize security and cognitive needs.
The orientation should be fact-based and future-oriented.
The "Thinking" orientation is recommended as perception and decision preferences.
The potential of the team should be power-motivated (to have things under control).
Logic (causal relationships) and goals (what is to be achieved for whom.

These characteristics can be compared in detail with the potential team members. A better two team members should be involved in the important topics.

Profile of the team members

In companies that use IPM, the motivation profiles of the employees are usually available. Alternatively, the text analysis can also be used, for example for CVs, letters of application or other texts of potential participants.

The comparison values are then available in the database. In our example, a core team of 4 employees was initially considered, which is now to be expanded by 2 persons. The first comparison shows which of the mentioned important characteristics are already given. Here is an excerpt from the database:

Green indicates good matches, yellow indicates those that tend in the desired direction.

We are looking for complementary employees with a high future orientation, power potential (in the sense of of control ) and a focus on goals and logic.

If these are not found, it is the task of the team leadership to address these aspects separately and, for example, to have the results actively reported by the colleagues marked yellow. Depending on operational possibilities, it may be useful to supplement the team with external competencies, e.g. temporary team members.

Collaboration in a team

This matrix can be used for the perception of the emotional orientation and the team-internal communication: 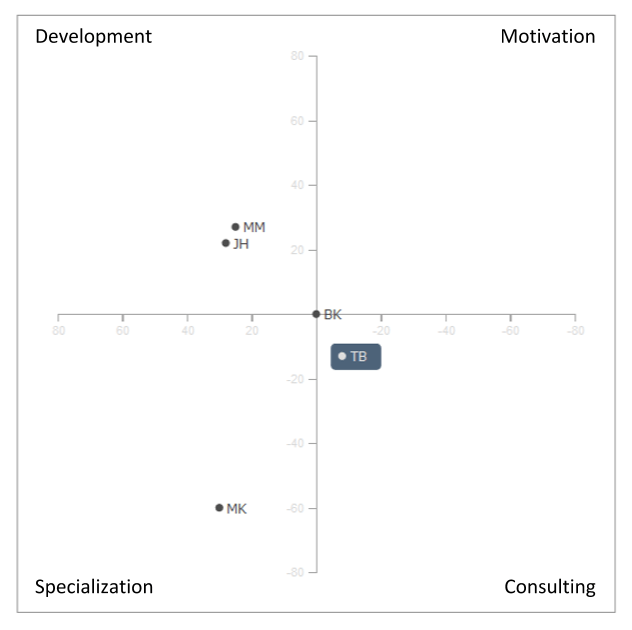 Middle positions (deviation from both 0-points max. 20)
This section contains profiles in which the dynamics between enforcement and security, individuality and integration are weak. In the best case everything should always be considered equally.
People with this profile usually communicate harmoniously moderating, they try to include all aspects in a calm way.

It turns out that "BK" is close to the profile of the planned complaint management team and can be active in a balancing, coordinating way (middle position).

Motivation (quadrant top right)
Here the needs for implementation and integration have a stronger effect than the need for security and individuality. This leads to a desire to motivate colleagues to participate.

Motivators communicate vividly and powerfully. They want to advance something and inspire others.

This is not to be expected from the team itself. If necessary, the management should "sell" the sense and performance of the team.

Consulting (quadrant bottom right)
In this area the focus is on "proper" advice according to defined criteria. All organisational measures focus on their effect on those involved and affected.

Consultants understand the art of active listening. They seek closeness and want to support.

The team as a whole should tend in that direction. Since this is about creating and implementing the system, it seems to have a lower priority. Here, too, management must check, for example by means of audits, whether the team's recommendations have the necessary degree of customer friendliness.

Specialization (quadrant bottom left)
The interaction of "security" (order, sustainability) and individualization (characteristics, quality). Team members in this area are reliable and strive to avoid mistakes.

Specialists communicate cautiously. However, they observe attentively and listen critically.

This position is occupied by "MK". Because of the calm and critical nature of the position, it makes sense for the team leader to accompany the interactions attentively, otherwise there is a danger that team members in this area will be lost in lively discussions.

Development (Quadrant top left)
Whoever equally strives for individuality and implementation likes to develop something new and special. These are the typical members of project teams in which they see a chance to realize themselves to a certain extent.

Developers communicate in an alternation of critical listening and powerful to pushy interventions.

With "MM" and "JH" two team members are quite close here. If they are allowed, they will determine the dynamics of the team. It is therefore important for the team moderation to give the other team space to formulate their own contributions.

Recommendation for the integration of additional team members

We have determined the profiles of the current candidates: We are looking for additional employees with a high future orientation, power potential and a focus on goals and logic.

From the point of view of emotional team dynamics and also for the topic "complaint management", one or two team members with typical consultant qualities would be desirable. On the one hand, they would be a balance to the two developers and, on the other hand, they could emotionally empathize more easily with the effect of complaint management on customers and employees.